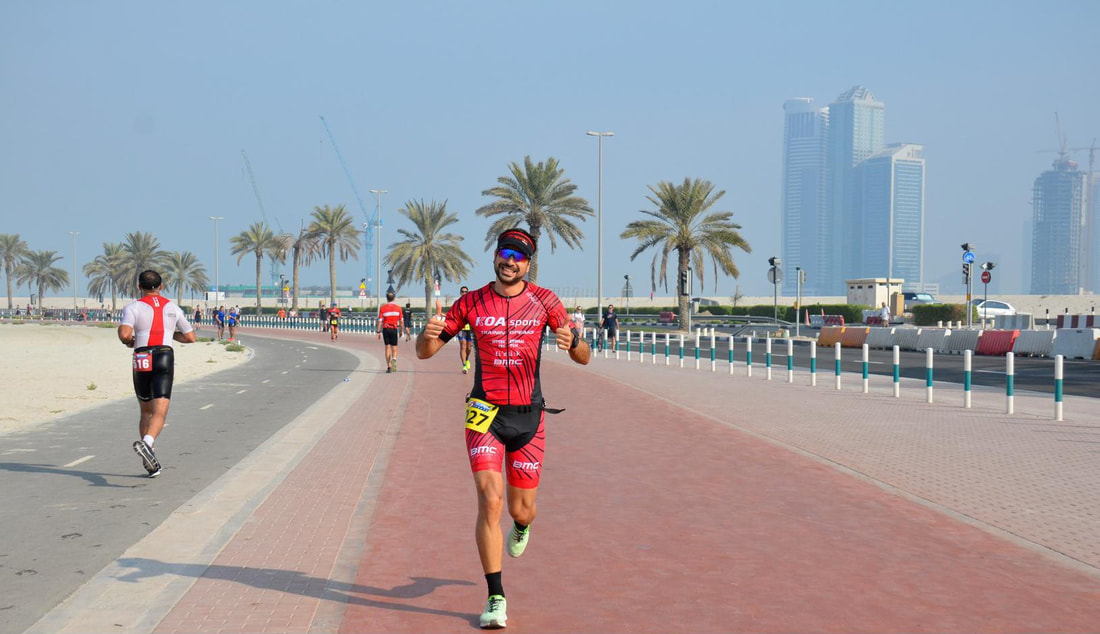 Ever since I was a kid, I was super active. Primarily enjoyed basketball and football and was pretty good at it. Gradually life took me out of it and I gained so much weight and picked up smoking.

My journey in endurance sports started with running back in 2013 when I took running as a medium to quit smoking after 11 years of heavy smoking. The idea came out of the blue and I went on my first run where I couldn’t my catch my breath after 200 meters. This was frustrating but it motivated me and challenged me - I like challenges.

Long story short, just like any runner, I got addicted and I completely quit smoking after few months of running. And then running became my primary addiction that feeds my addictive personality.

There’s no detachment of endurance sports and the perception of suffering. In life we grow when we suffer, and it’s the same in endurance sports. The more you stress the body the better it will cope with physical challenges.

After moving to Dubai, I participated in many running races and I suffered a serious injury in my right foot and ankle. That’s when I was introduced to triathlon by a friend and I saw in it a natural evolution from my passion for running. My addiction to running was merely about the joy of suffering. I saw in having to train for 3 discipline a more rewarding sport, especially that I was unfamiliar with cycling and swimming.

One day I went and bought a random bike and started cycling and I felt that it has helped my running massively and since then I started noticing the benefits of cross training. Swimming for me was the hard part because it was all about getting comfortable with the uncomfortable as I’m claustrophobic.
I took on triathlon but I had no clue how to plan for the training, especially that it got complicated here with 3 disciplines.

I ventured into a tri race purely with basic training. And I felt all the emotional rewards of completing the race. But I also felt that there is so much to work on and without proper planning, improvement would remain a wish, and possibly going back to the vicious cycle of chronic injuries.

I got in touch with trainingpeaks hoping that they would connect me to a coach that would help me take my training to the next level. I got contacted by Tim, an endurance coach from Australia.
In the beginning I thought that injuries will come no matter what you do. But never realised that with proper planning, the body can adapt to heavier load of training and this would prevent injuries on the long run.

I started working with Tim and we’ve set the goal to break the 6 hours in Ironman 70.3 Dubai. At first this goal seemed to me like a dream. I had the will and the passion, as well as a small advice from Tim, when he said; Consistency is king. I did not take that lightly and I put that as my main target. Doing the training everyday, even on the days where I felt I didn’t want to do it. The goal here was to build the habit.

Summer in Dubai is the off season, opposite to the rest of the world. Temperatures rise and training outdoors becomes impossible and ultimately dangerous as you risk dehydrating. Tim and I started working only on our goal. And during the off season our training was full on, preparing a good base for when things get serious. With the season kicking off in Dubai, I took part in short races, (Sprint and olympic distances). And honestly I was shocked with the numbers that I was getting. I never thought I would be able to do what I did. My body started coping really well with the plan he was putting for me and I was able to handle more intense running and cycling and most importantly overcoming my discomfort in swimming.

The training plan that Tim sets for me is easy to understand, especially swimming. I don’t like it when I read online about swimming zone. i.e. swim this distance at zone 2 or do this at zone 5. That made no sense to me. The thing I liked here is that, the sessions that Tim was adding made me worry less and do more. This was very important because with the long training hours you only need something to make you love it more rather than put you off.

Another important thing here is that I look up to him a lot, knowing that he’s done Kona twice as well as winning multiple 70.3’s… for an athlete it means a lot to be coached by someone who’s successful in the sport.

Tim has been also very responsive and flexible in adapting the training plan to unfortunate events that happened in my personal life. It’s uplifting when there’s someone, on the other part of the world, helping you grow, and doing what’s possible to make it easier for you. Not to mention the nice comments he told me when I was completely demotivated.

The bike workouts has been very helpful and the structure of the bike workouts has helped me better understand what I’m capable of. I remember going out on a first outdoor ride in Dubai after few months of indoor training due to weather. I went out with no planned workout and said I would test where I am at in cycling at the moment. I was able to shave around 20 mins of my bike time on the same 90km course I usually do on weekends. I was surprised but it was kind of expected to be honest.

My most recent race, olympic distance was a great achievement where I managed to finish the race with an awesome finishing time as well as coming 4th for my age group. When I told Tim about this, and that I wanted 3rd, he said 4th is better, it will keep you hungry. And I realised that he was right… I need to remain hungry to achieve more and keep fighting for more.

Surely the structure of the training as well as having someone who cares behind the scenes made a whole lot of difference. It just made me fall in love with the sport even more as I was able to feel myself grow and improve as well as finding an identity for myself.

Honestly I couldn’t recommend this experience enough to anyone as it has changed my life and my advice to anyone willing to take their training to the next level would be to join KOA or at least have a chat with the coaches and see what’s possible to achieve for them. Everyone has potential but you need a good coach to bring out the best in you.

My eyes remain on the A race Dubai 70.3. Even though the element of surprise is gone as I’m sure of what I’m capable of now. But things keep improving, and day after day my times are changing. My goal was sub 6 hours at first, but now I don’t know what to aim for.