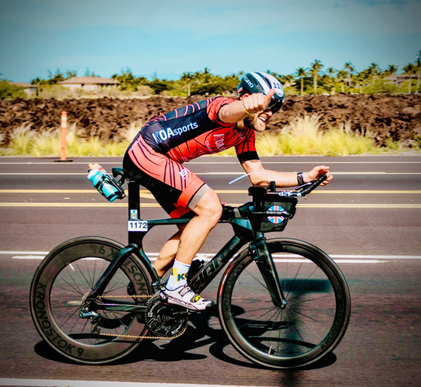 I started my triathlon journey in 2008 at the age of 35 after leading a pretty sedatory lifestyle up to that point.

I started with the shorter distance races but soon learnt that long distance was my passion.

After several Ironman races and a few years down the line I was knocking on the door of my ultimate dream of competing in the Ironman World Championships in Kona.

I was so close to qualifying on numerous occasions but always narrowly missed out.

Something was missing and only now do I know what it was.
In October 2018 I was listening to a podcast which featured this “Aussie bloke” talking about his journey to Kona and that he was also a full time coach.

His enthusiasm was infectious and as soon as I had finished listening I was drafting an email and making contact with Tim @KoaSports.

From that day I not only became a Koa Sports athlete but I became part of the KoaSports family.

I can honestly say it’s the best decision I’ve ever made on my triathlon journey.

From 1st contact with Tim I was treated like an individual, I was asked questions on my sporting background, diet, sleep patterns, work and family commitments even how much coffee I was drinking!

I was not just given a generic training plan, it was tailor made to my specific requirements.

My training methods changed and I started to see real improvements across all disciplines.

Things were new and refreshing again and the introduction to Zwift racing in the KoaSports league made indoor training fun and challenging and I made some significant gains on the bike.

I had done 9 IM races before I met Tim and after a chat we came up with a plan and I entered Cairns IM in June 2019.

Preparations went great in the preceding months and the 2 half IM races I did showed some good improvements.
I also attended the KoaSports training camp on the beautiful Sunshine Coast. A whole week of swimming, biking and running in the sun with a great group of people which I’ve kept in touch with and are now good friends.

On June 9th 2019 I towed the line in Cairns, I followed Tim’s race plan and on my 10th attempt my dream was realised and I qualified for the IM World Champs in Kona.

On October 12th 2019 I had the privilege of running down the finishing chute on Ali’i Drive an achievement I never thought possible.
​
None of this would have been achievable without my top draw coach and now good friend Tim Ballantine @Koa Sports, he changed my expectations on what I thought I could achieve. I no longer think qualification is a 1 and done and have more self-belief.
I never thought I would get older and faster so now I plan on trying to qualify for the big island again in 2021 with Tim’s help.
If you’re in any doubt don’t be drop Tim, Greg or Kent a message and become part of this amazing Koa family you really wont regret it, I certainly don’t.